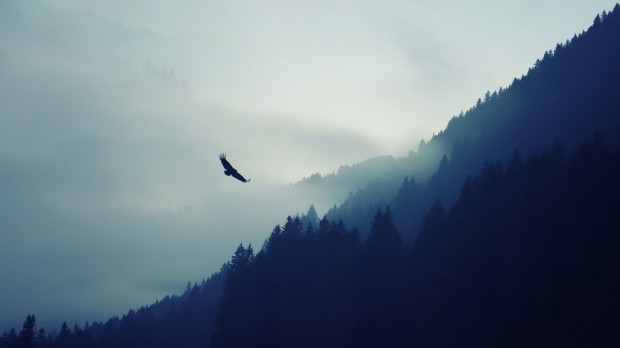 Last Friday, when warm joy began to flow through me once more, thawing the ice of old winter, my daughter pointed out two eagles perched atop a swaying fir branch. They were so far away and we were in the car, moving fast. Yet, my girl saw those beautiful creatures and was able to point them out to me. And I had enough time to gaze in awe at their beauty.

They were indeed very far away and I don’t have that great eyesight. But something about those twin eagles stirred the depths of my spirit. I felt a silence fall into my heart. A peaceful silence.

It didn’t matter, because by then, I was aware of something: every time I saw eagles, everything in me and around me stilled. And I was filled with the deepest peace, even as my spirit straightened in awe.

Who are you? I asked the soaring magnificence.

That night, I set about to find out about the symbolism of eagles. At a Christian website, its author, himself intrigued by eagles, had written about this great bird’s characteristics.

One characteristic which reached out and caught me was the eagle perching for days even, awaiting the right wind conditions for it to soar in the sky. Because of the heaviness of their wings, it is imperative for an eagle to soar – to fly without flapping its wings, as much as it can, in order to preserve energy. To soar, the bird requires wind thermals – a big gust of wind – and so, the eagle sometimes has to wait a long time for them.

They are patient, I learned. I had always thought of eagles as business-like, focused but I’ve never equated them with patience.

After that revelation, I never saw another eagle in the sky.

But soon something else caught my heart. Mexico. When that name was laid upon my heart, I felt gentle arrows of joy once more embed themselves into me. Why this joy over Mexico? I wondered. It didn’t make sense to me as anytime Mexico made the news, it was rarely positive. Earthquakes, drug cartels, gangs, corruption, drug wars, murders – all those were associated with Mexico for me. Yet Mexico for me was also about the warmth and love of family, the strength of old and tested faith.

On a whim, I looked up pictures of Mexico, to get a deeper feel of that country. I was taken aback when I pulled up an image of the Mexican flag.

At the centre of it was an eagle.

It became clear then that someone was trying to tell me something.

I decided I’d let it rest, and that I’d rest myself too. God would make things clear in His time. No sooner had my head touched the pillow when I suddenly recalled why Mexico is special.

It was the home of the Guadalupe Marian apparitions. I myself have a special devotion to Our Lady of Guadalupe because whenever I’ve struggled with Islamism, She has been close by.

Her presence has always indicated that particular battle.

Guadalupe, I breathed. Guadalupe and its personal significance, coming when my family and I are praying the special Muslim fasting month Rosary. It was no coincidence. My thoughts went to Jesus’ words that touched me some weeks back, I alone know what lies beyond the bend. I thought about the way I knew those words were meant to mean something to me, and yet, I could not feel it when I first heard them. But this very day, I recalled those words once more, and this time, they stirred the depths of me.

Something lies beyond the bend, my spirit intoned.

And a strange, quiet excitement took hold of me, even as I sensed there would be trouble of some form ahead.

What does this mean? I pondered.

Something lies beyond the bend

I decided to write to a friend strong in the faith. She replied, telling me eagles were often associated with contemplation. Yet another thing I hadn’t known. I pondered that too.

Although I felt I knew pretty much all there was to know about the Guadalupe apparitions, I looked them up anyway. Imagine my utter surprise, when I came across something I didn’t remember reading before. That the native name of the poor, humble man who saw the Virgin of Guadalupe in the 1531 apparitions was Cuauhtlatoatzin.

I could sense my spirit still inside me once more. This was the path I needed to take. St Juan Diego.

So, I went to learn about St Juan Diego, the name the humble Aztec native took upon his conversion to the faith.

And the second surprise of the day awaited me.

During the apparitions, when Mother Mary asked Juan Diego to take a message to the Bishop, asking for a temple to be built on the Tepeyac Hill, the simple man had hurried to obey. However, after listening to the message, he was turned away by the Bishop. Returning to the Lady, he told Her all that had happened. Reluctant to return to the bishop’s residence, he pleaded,

I must have read about those apparitions many, many times. And yet, only today, did I learn of that anguished utterance from a heart so humble.

I am a nobody, I am a small rope, a tiny ladder, the tail end, a leaf.

Again, I turned all this over in my heart. I could sense a door open all through this discernment and that door had not yet shut, indicating I was to go on deeper. Then, I came across something.

Juan Diego had died on May 30.

Was this Diego journey, begun yesterday, to be a 9-day novena, ending on the 30th?

And then, I saw what else was to be celebrated on the 30th of May.

Ascension of our Lord.

For some reason, the Eagle of Mexico has come to take my hand. I have none of his humility, none of his steadfastness of faith. I crumble easily. Although I can love deeply, patience is a virtue very much in want in me.

But he has come. His hand I will take, his voice I will listen to.

And the message of his heart I will learn.